The Wool and Mohair Promotion Project (WAMPP) held the second annual auction of Merino rams and ewes on the 03rd March 2021. The event attracted more than a hundred buyers from the different parts of the country. Held at the Quthing breeding Centre (Sheepstud) at the beginning of the year, the auction is a highlight of the wool producer’s calendar. In the past, Basotho smallholder wool producers had to rely on South African farms to source Merino rams and ewes – with transport costs and customs duties escalating total costs, thus making improved genetics accessible to only a few farmers. The highest-priced ram sold at M30,000. More than three hundred animals were sold under the hammer. 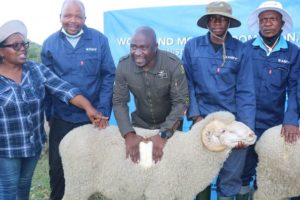 The national average yield per animal in wool production is 2.7 kg. Under WAMPP, Lesotho has set itself a target to improve this to around 4 kg. The success of this year’s auction, judging from the number of participants is a sign that Lesotho is headed in the right direction towards achievement of this target.

Find Us On Map

Subscribe us to get latest news and usefull tips.